Terminal Systems Inc. (TSI), part of Global Container Terminals Inc., is the largest container terminal in Canada. TSI operations include the Vanterm terminal in Vancouver's inner harbour and the much larger and busier Deltaport deep-water terminal at Delta. 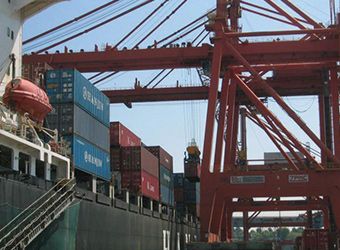 The server consolidation ratios are just phenomenal, and the IBM hardware allowed Compugen to reduce the space consumed to a single rack, with space left over.

A large number of servers are required to support the development, test, production and backup environments for the ERP system that controls operations and the monitoring and routing of containers at TSI terminals. As the number of physical servers in the datacentre grew, the server farm became unsustainable. An initial deployment of VMware server virtualization enabled TSI to reduce its server count from 300 to 100 physical servers across both terminals.


Virtualization stopped the server sprawl, but we had nothing but problems with the underlying server infrastructure," said Michel Labelle, Manager, Network and Terminal Support Services, IS Department,, citing the example of how servers often went down due to power supply failure. "Every single power supply in all 10 blade racks had to be replaced at least twice over the five-year period we used this brand of servers – that's 80 power supplies.

After careful analysis supported by a report from consultant CGI Group, the TSI team chose the Compugen team and IBM servers to replace the existing equipment.

Virtualization has reduced TSI's server infrastructure to a single rack and avoided the need for a substantial increase in power and a new cooling system.

Labelle and his team are excited about the modularity and scalability of Compugen's IBM and VMware solution, giving TSI the ultimate field-replaceable unit for disaster recovery – the entire server infrastructure in a single, movable rack – and if additional capacity is required, more processors and memory can be easily added to the IBM servers.

"We entrusted everything to Compugen – they designed it, they ordered it, they built and tested it – which, in my opinion, shows our level of confidence that our partner really understood our business and what we were doing," said Labelle, adding that the physical installation and layout, with cabling and all, was the best he has seen in his many years in IT.