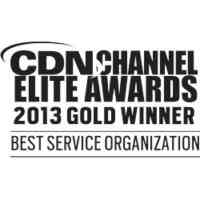 Toronto, ON, September 24, 2013. Compugen is pleased to announce that it has been awarded a Gold Channel Elite Award at the CEA ceremony that took place in Richmond Hill, September 11, 2013. Compugen won Gold in the 2012 Services Organization category for its multilingual Help Desk solution for CommVault®, a publicly traded data and information management software company headquartered in Oceanport, New Jersey.

Facing significant growth in the Asia-Pacific and Eastern European markets for its Simpana® backup software, CommVault turned to Compugen in 2010 to provide simultaneous language translation to Simpana software customers calling for support in languages other than English. Since that time, the number of CommVault-dedicated Compugen staff has grown to 25 and languages supported by Compugen staff include French, Russian, Japanese and several others.

Of special note was the ability of Compugen to step up and provide exceptional assistance during Hurricane Sandy in October 2012, when flooding on the U.S. eastern seaboard reduced the ability of CommVault’s Oceanport staff to handle calls.

"The partnership with CommVault has been very successful,” said Louis Gervais, Regional Director, Virtual Infrastructure Solutions, Compugen Inc. “CommVault has graciously acknowledged our work for two years through Global Support Partner of the Year awards, and now this recognition through the Channel Elite peer process is icing on the cake. We owe a big thank you to our talented team of support agents and their managers and to CommVault for enabling us to integrate so well into their global support system."

Compugen has previously been recognised by CommVault as Global Support Partner of the Year in 2011 and 2012.

< Back to all News & Articles

Compugen has announced the success of several of its community outreach initiatives as it reaffirms its commitment to corporate citizenship through ongoing charitable work. Historically, the national IT solutions provider has encouraged individual branches across Canada to support their local foundation of choice through donations and employee volunteerism. Every year, different Compugen offices organize fundraising events such as silent auctions and raffles with staff and partners to benefit their chosen cause. Read More …