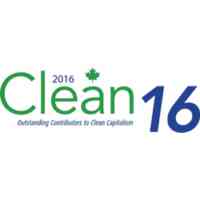 Compugen Finance’s Green4Good® Program was honoured on 22 September as an Outstanding Contributor to Clean Capitalism. The Clean50 Individual awards – or just “the Clean50″ are selected from 16 diverse categories that represent numerous industries, academia, different levels of government, thought leaders and advocates, and are based on accomplishments delivered over the prior two years. The leader in each of the 16 categories is also declared to be part of the Clean16, depicting those 16 Honourees as the top contributors in their respective categories. Fellow honourees in the Clean16 this year include Ontario Premier Kathleen Wynne, Quebec Premier Philippe Couillard and 13 more dedicated Sustainability professionals from multiple sectors of the economy across the entire country.

“Compugen is proud of the whole Green4Good team under the direction of Steve Byrne for making Green4Good such a success,” said Steve Glover, Senior Vice-President, Compugen Finance Inc., in acknowledging the award.

The award citation reads as follows:


Contact Steve Byrne for more information on Green4Good, or visit the Green4Good site.

< Back to all News & Articles

Compugen has announced the success of several of its community outreach initiatives as it reaffirms its commitment to corporate citizenship through ongoing charitable work. Historically, the national IT solutions provider has encouraged individual branches across Canada to support their local foundation of choice through donations and employee volunteerism. Every year, different Compugen offices organize fundraising events such as silent auctions and raffles with staff and partners to benefit their chosen cause. Read More …